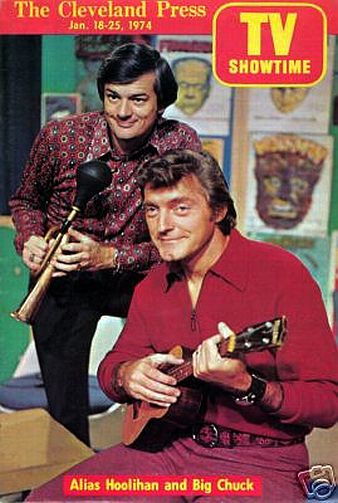 With Big Chuck and Lil’ Jon, there must also be a discussion of the man before them. Bob Wells, also called Hoolihan the Weatherman, was already a veteran and radio and television when he arrived in Cleveland. Asked to do the weather is a funny manner, Wells was dubbed ‘Hoolihan’ by a production manager. From there he began to appear on Shock Theatre with Ghoulardi, first as an extra before moving on to sidekick status.

When Ghoulardi left in 1966, it seemed natural to promote Wells to main stage. Along with Charles Schodowski, fans were greeted to the Hoolihan and Big Chuck Show.

The show was a hit, even beating the Tonight Show with Johnny Carson for a time. Wells officially quit the news in 1971 to freelance in Chicago and New York, but stayed to do the show.  In 1975, Wells and his wife Barbara started WSUM Radio in Clearwater, Florida. In 1979, Wells left the Hoolihan and Big Chuck Show to start a Christian themed television station in Florida.

Bob Wells is officially retired, although readers in the Florida area might catch him in a few local area productions or listening to local commercials.

The Hoolihan and Big Chuck Show began on WJW-8 in 1966 and lasted until 1979. Bob Wells is presently retired