You read correctly! Today, we’re covering two games instead of just one. My reasoning is pretty simple: there are a bunch of songs that I want to cover and I feel bad only selecting two or three per game as I might not have as much to say about any given track. So we’re going to look at a bunch of songs from across Donkey Kong Country and its sequel, Diddy’s Kong Quest (or as I mistakenly referred to it for the longest time, Diddy Kong’s Quest). But first, let’s take a brief look at some history of these games.

Donkey Kong Country was released by Rare in 1994 and the sequel was released in 1995. The former utilized a new technique of 3D rendering, one of the first to do so on the SNES (another notable game to do so was Killer Instinct). Thanks to this technology and a super aggressive marketing campaign, DKC was a massive success. Donkey Kong Country 2 was one of the most popular games of all time, being the 6th highest ranked seller on the SNES. Most if not all reviewers consistently ranked it highly. So in the gameplay department, these games have a great reputation. Like any good game, a great soundtrack helped them along.

The soundtrack to Donkey Kong Country was composed by Robin Beanland, Eveline Fischer, and David Wise. DKC2 was composed solely by David Wise, but the quality certainly did not deteriorate with the lack of two other composers. The soundtrack of both games are comprised mainly of background songs, providing underscoring to the game. There usually isn’t a main melody and sometimes the songs are just relegated to sound effects and nature sounds. Country 2 definitely had a more melodic soundtrack and has one of the most memorable songs that Donkey Kong Country has to offer. I have a couple of songs from both, so let’s barrel blast into it.

This song is a great representation of the times, and of the new attitude towards the Donkey Kong property. The theme starts with the original title theme to Donkey Kong (the arcade game) being cranked on a record player by Cranky Kong (the original, and now elder, Donkey Kong).

The new Donkey Kong bursts onto the scene with a hip-hop beat and a boombox. This feels very 90s; the way that the old is being replaced with a new and hip character. Obviously, this is Donkey Kong we’re talking about, so it’d be fair to question how hip and cool you can make an ape with a tie (Answer: very cool in fact). The intro makes it clear that from this point on, Donkey Kong is no longer what we remember from the arcades, but is now a protagonist and has his own band of bad guys to fight. He’ll team up with his nephew Diddy and a whole new world for Donkey Kong arrives. This marks the beginning of something very special, so it always stands out for me.

That’s right… it’s two main themes in a row! With the job of establishing Donkey Kong’s new universe out of the way, the Donkey Kong Country 2 theme can focus more on a story with characters that have already been introduced. Now we have a totally new and unique song with clear pirate influences and a sense of adventure. It’s a great song (if not too short) and it’s good for the series. We no longer need to do a remix of the old themes because we are already accustomed to what’s happening and who the characters are.

Funky Kong is one of the new characters that you meet in Donkey Kong Country. He offers transport between different areas in his Jumbo Barrel (a barrel with a jumbo jet fused onto it). This song provides a great introduction to Funky’s services with a quick beat that fits with the notion rapid travel. This theme assures you that using the Jumbo Barrel will get you where you want to go and quickly. Funky isn’t really the standout here as much as his barrel is. Also, you have to love that HIYAH that comes every so often. Of course, Funky would return in DKC2, and his theme would be quite different.

Aside from the fact that the name of this song is awesome as hell, it’s probably the track I most associate with Funky Kong. As much as I like the Funky theme from DKC, I think this song found its way in because it’s about the character. Like I said, Funky’s original theme doesn’t necessarily describe him; it describes his service. His duties haven’t changed in the sequel, but his theme is distinctly… well… funky. Rightly so, because now that we know what Funky’s job is from the first game, we can see him for what he is as a character. The song lets us do that; we can accurately describe Funky Kong as a fun-loving surfer and smoothest Kong on the planet. Donkey Kong 64 would turn him into some sort of military nut, and he would turn back again later. I’ll always remember Funky for this song, though. No substitutes.

Mining Melancholy captures the idea of prospecting very well, especially if you listen to the beginning and background effects through most of the song. The clanging sound effects that are used a lot sound like picks against the rock of the mine. Really, I just love it because it reflects the emptiness of a huge mined cave, and in true Donkey Kong Country fashion, underscores the levels that have a mine as their background. In some parts, like 2:15 to 2:34, you can hear the effort and struggle of the miners as they continue to work their bones. Donkey Kong Country 2 had a lot of tracks like that, but the sounds of those picks make this example stand out. However, there is still the most famous song that is usually selected from Donkey Kong Country games as a masterpiece of composition.

This is certainly one of the few songs you can take from the game and listen to without the context. I appreciate great music, and while Stickerbrush Symphony isn’t my favorite song from the DKC games, I can easily see why so many cite it as theirs. The levels that feature this song take place in an area that truly contradicts the theme itself. The levels are surrounded by spiky vines that will kill you if you touch them. Bramble Blast makes you want to let go and just chill out in the sky above. So you’re invited to relax in an area that you can’t relax in at all. I suspect that it’s done that way for a reason, and that reason is to lull you into a false sense of security. The music is that good to listen to, so I can say for sure that I’ve had a lapse in judgment on those stages. It’s also a great nostalgic tune, so people are bound to lose themselves in the memories.

In the war of final boss themes, Donkey Kong Country wins out every time. You have a stare down with the hefty crocodile on a pirate ship: the King K. Rool. The song starts with a jaunty pirate song (like one would expect from a stereotypical pirate ship) and then in good final boss fashion, amps up the intensity. The rapidly thumping base and guitar prove that K. Rool is more competent than he appears and this battle won’t be that easy. The title screen and this song are probably the tracks that most people remember. Like I said, most of the songs on the soundtrack were background music as opposed to actual songs, so when an actual song shows up, you’re likely to notice it. While I can’t claim that Kaptain K. Rool from DKC2 is a better or worse boss than his first appearance, I can say that Gangplank Galleon leaves a bigger splash.

The SNES era and the 90s were a great time for platformers. Donkey Kong Country helped launch Donkey Kong from a mindless King Kong impersonator into his own character. Though there have been reviews calling DKC overrated, I think the impact the game had on the market is undeniable. Donkey Kong Country 2 raised the stakes in difficulty and atmosphere, raising a generation of gamers who were well prepared for more difficult games down the line. Combined with an awesome soundtrack, these games have already gone down in history as greats, so there’s not much more for me to say about that.

Thanks for reading this Jumbo Barrel to the past. See you tomorrow! 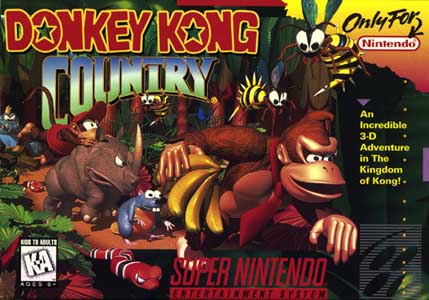