For #MVPride I’m going to tell you about a character that is not only incredibly underrated, but a personal favorite of mine. That character is Kate Godwin aka Coagula. She’s part of the DC Comics universe, has been rejected by the Justice League, been a part of Doom Patrol, was shelved for a decade only to be unceremoniously killed off panel and never brought up again. She’s the first and only trans superhero at DC Comics.

Coagula’s origins begin in the early 90’s at the end of Grant Morrison‘s Doom Patrol run. Award winning novelist, trans-activist and world renowned tarot expert Rachel Pollack was a big fan of what Grant was doing and ended up meeting Doom Patrol editor Tom Peyer at a party. She said how if she had the chance to write a comic for DC it would be Doom Patrol, to which Tom informed her that Grant was leaving the book and asked if she would be interested in taking it over. Rachel went on to take over Doom Patrol from issue 64 to its cancellation at issue 87 giving her the third longest run on the series. Seven issues into her run, Rachel was asked to do a one shot issue with a fill in artist, Scott Eaton. While she wasn’t thrilled with the idea at first, the story went on to be one of the most memorable moments of her run. In September of 1993 the world was introduced to Coagula as well as the villainous personification of toxic masculinity, Codpiece.

In Coagula’s first appearance she is unapologetically trans, sex-positive revealing that she gained her super powers from sex, and reveals the Justice League rejected her for being trans. Codpiece is introduced as a protype MRA who creates a gigantic codpiece canon with other gadgets attached. Coagula single handedly defeats this horrible cishet white male menace and is welcomed into the Doom Patrol. 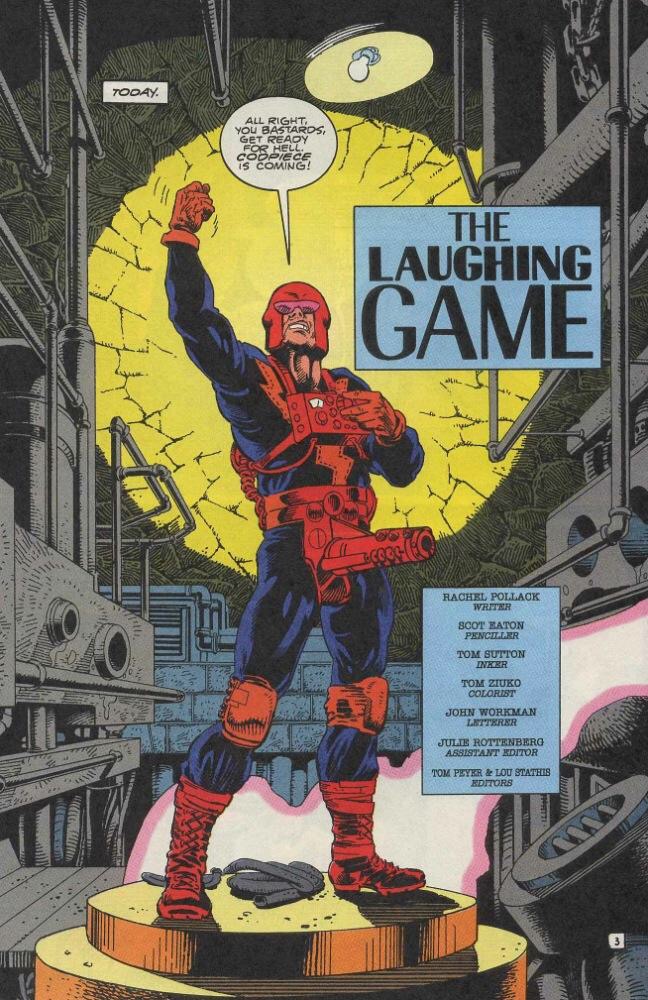 After that first appearance, Coagula is drawn for many issues by nonbinary artist Linda Medley. That’s right; in the mid 90s there was a trans superhero written by a trans woman and drawn by a nonbinary person and you may not have realized that. Later, Ted McKeever would become the regular artist on the book and in those issues we get powerful stories involving Coagula. At one point, Doom Patrol regular Robotman who has expressed interest in Coagula finds out she’s trans and confronts her. In a beautifully put response, she asks Robotman if he considers himself a man despite the fact that he’s a human brain in a robot body. The two would eventually not only care for each other, but would be called upon to be the perfect example of a man and a woman to confront a nemesis in white possibly the best arch of Rachel and Ted’s run, The Teiresias Wars.

Coagula was fantastic trans representation in superhero comics decades before we were getting it. Though it’s been out of print since it’s initial release, Rachel Pollack’s Doom Patrol is finally being collected as a trade paperback early next year. The first volume is already available for pre-order on Amazon. If you know Coagula, she might be your choice for MVPride. If you don’t know her, please pick up Rachel’s collected Doom Patrol next year. You might just find your new favorite hero.

This #MVPride guest post was contributed by Joe Corallo. Thank you!
Please support the #MVPride project and all our contributors by backing our Patreon. Funds go directly to paying contributors!

About Joe Corallo 1 Article
Joe Corallo is a Columnist and Project Editor for ComicMix. He is also a regular contributor to Geeks OUT and [insertgeekhere].